Glassdoor surveyed 5,000 adults across 4 different countries, including the United States, and found that salary is not the only factor in an employee’s satisfaction with their job. Job seekers are upping their standards when applying for jobs. The study concluded that 70% of applicants would not apply to a company unless its values align with their own. This will only become more prevalent as time marches on, with data points on age producing some unexpected results. The study defined the demographic of millennials as individuals aged 18-34. Those individuals indicated they valued a company’s culture more than the level of compensation. This is significant, because millennials are currently the largest employed generation in the workforce.

As they age, corporations will feel the pressure to change their corporate culture so they can retain existing employees and create a healthy corporate environment for future employees. Social media and smart technology are largely responsible for this shift in the attitude of job seekers. Not only is news and information about corporations ubiquitous and accessible, but current and former employees also have platforms like Indeed and Glassdoor to share their employment experience with the world. With a constant communication line to the rest of the world, the line between one’s work life and personal life will only continue to become more blurred. As such, daily happiness and satisfaction within one’s job is more important than ever.

The study went on to state that 74% of employees who participated in the survey said they would leave a position if the company’s culture has declined. Amanda Stansell, the senior economic research analyst for Glassdoor, points to all of these as reasons why corporations must take their current culture into account, “Even if the company culture is good, it can change, especially if they aren’t reactive and constantly measuring employee satisfaction and actively working to improve it.”

Forbes also noted in recent months that many corporations are expanding internal investigation teams in order to address pervasive internal issues more efficiently. The more we know about the cycle of corporate culture tells us when leadership is engaged. CEOs and management must engage with their employees beyond their quotas and productivity level. Some leadership may believe things like a pitch-in or birthday parties for employees are enough to keep employees happy, but the problem runs much deeper. Employees want to see leadership actively improving daily operations by listening to employee feedback and instituting new strategies that contribute to the health of the workplace. This means supervising communication lines and holding apathetic employees accountable when they contribute to stalls in operations. It is an opportunity to lead by example for the entire workforce. When employees see engaged leadership, they feel validated in their part of driving success within the corporation. This leads to increased engagement within the workforce, which leads to increased productivity. Increased productivity means happy leadership, which starts the cycle anew with happy employees.

When a corporation is functioning as a well-oiled machine, it can be easy to neglect the corporate culture in day-to-day operations. If productivity is up, leadership remains happy—but executives and management must make a focused effort to take an interest in their employees’ happiness in the workplace. This prevents employee apathy, improves daily operations, and overall, contributes to the long-term health of the company. The company retains employees at a higher rate, which decreases turnover expenses, and creates a fortified workforce essential to promoting success. 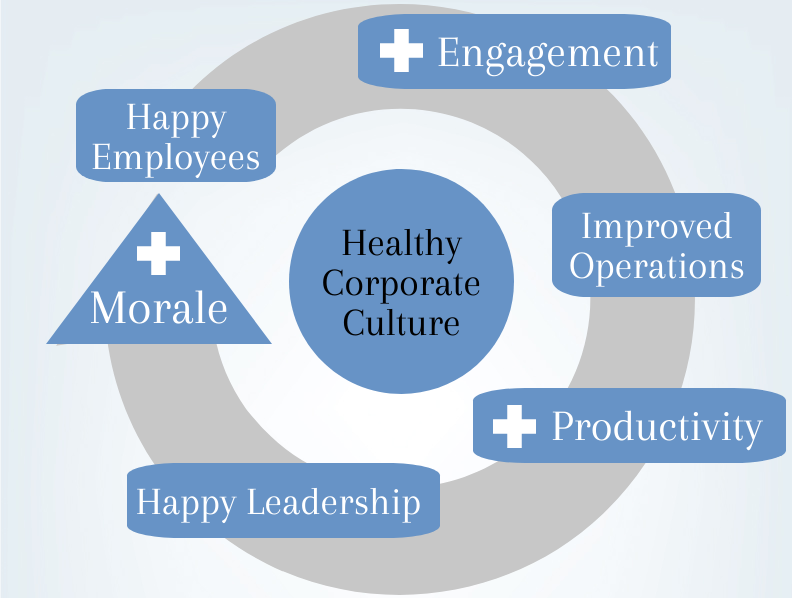 Corporate Structure is Not Corporate Culture

The corporate culture within any company, without question, effects their bottom-line day to day. Just to name a few avenues, this occurs through operations, interpersonal relationships between employees, and a level of engagement from leadership that requires consistent enforcement of their established mission and values. Because a corporation’s internal culture often remains hidden from consumer view, it’s not uncommon for leadership to simply restructure operations. Unfortunately, if every aspect of a company’s culture is not examined, this solution is just a band aid.

When concerning a corporation’s culture, we often use the iceberg metaphor as a means of defining it. Ten percent of a corporation’s values and culture are above the water where the public and consumers can see it, and the other 90% lies below the surface. It’s that 90% that directly affects a company’s employee morale, productivity, and bottom line. A corporation often places its highest priority on how they are perceived by their consumer base, and therefore that 90% of company culture and values are either placed on the back burner, or corporations find themselves at a complete loss of how to get in front of the issues.

The reason restructuring internally does not improve a company’s culture in the long-term is because the effects of a company’s culture are cyclical, and have nothing to do with the chain of command or employee hierarchy. The graphic above illustrates how a healthy company culture affects a company’s day-to-day operations:

Some other band aid fixes for happy employees include things like discounted vending machines in the breakrooms, or regular celebrations of major holidays and birthdays. These lovely notions might improve culture for a day or even a week, but the pervasive internal problems will remain.

Happy employees are engaged employees. When a corporation’s culture is healthy, employees feel invested in the success of their companies. The company’s success becomes internalized as their own success, and they are more likely to be plugged in, to take initiative, and to think outside of the box when it comes to problem-solving.

When employees are leaning into their positions and actively working towards a company’s goals, that leads to smoother daily operations. Engaged employees are constantly finding ways to improve their processes so they can generate higher rates of productivity within their positions

This one is a no-brainer. Anyone who has ever been employed knows that a happy boss makes a happy employee. Leadership sees the increase in engagement and productivity and lean into that success. Good leadership will reward that success in tangible ways that will have long-term effects on the company’s culture. They promote or give raises to those employees who are giving 100%, empower those employees through collaboration and development, and are more open to the thoughts and ideas of employees who are contributing to their success.

When leadership is actively encouraging employees through a pure manifestation of the company’s mission and values, employees feel as if they are making a difference within their organization. This increases the feeling of purpose and desire for cooperative teamwork. These feelings inspire employees to continue their pattern of success through the diligent, genuine practice of a company’s established mission and values. Increased morale means happy employees, and that’s where the cycle begins anew, exponentially influencing a company’s success with each cycle.

Structure is Not Culture

The network of operations within a company will never have a direct effect on company morale. Poor daily operations due to structure are really just a symptom of unhealthy corporate culture—a manifestation of poor culture at work. To diagnose the problem, many corporations turn to independent firms to conduct corporate culture audits in order to identify the problems within a company or organization. These firms measure a company’s daily operations, their quality of communication, and interpersonal relations among employees—just to name a few factors. When a corporate culture audit is comprehensive and curtailed to the organization, the findings can be invaluable to leadership that seeks to grow and mature in tandem with their values.

As mentioned above, employees who see a consistent display of established values from leadership, they’re more engaged and productive. It’s one thing to have the company’s mission statement and list of values posted online or on the wall within a workplace. It’s a completely different ballgame when leadership puts their money where their mouth is, and serves as an example for the entire workforce. That example can have a ripple effect creating an interpersonal trust between employees, in which they all feel like they’re on a team, working towards the same goal. It is in the nucleus of that atmosphere where real change and growth begin.